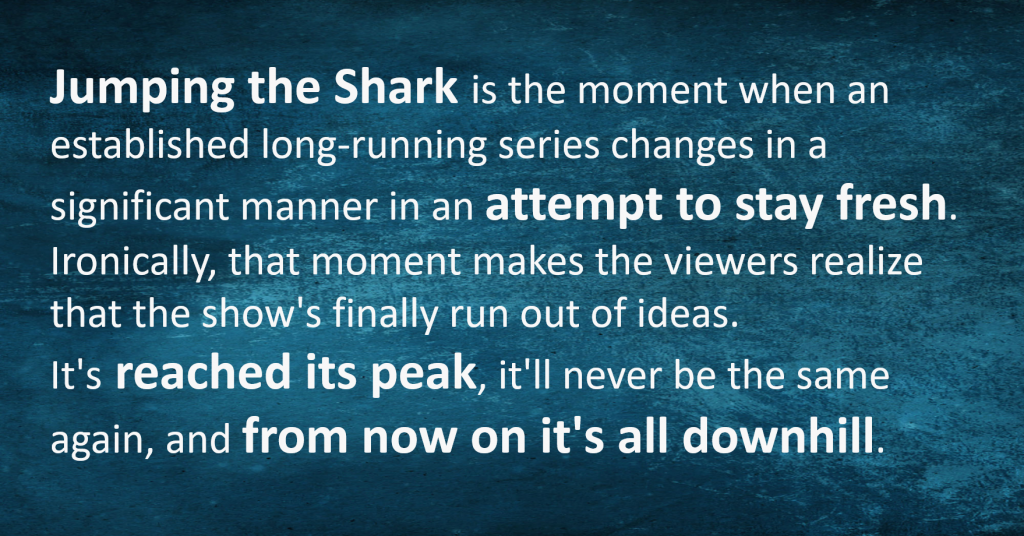 In little more than 24 hours my bold (foolish?!) prediction is either going to be proved right, or I’m going to look a right cock.

It cannot be disputed that poor Facebook is on a bit of a downer at the moment. In the past 12 months or so it’s been through the mill…

How does this slew of negativity affect consumer sentiment? I reckon quite significantly.

People are already sharing less and less original content on Facebook, which has been something of a trend for several years now.

It has now reached a critical point because these people (and their friends) are no longer getting the ‘value’ from Facebook that it once provided. Instead they’ve been fed a diet of news they’re hearing they can no longer trust, a filter bubble of polarised opinion, and eleventy billion ‘Suggested’ or ‘Sponsored’ posts (aka adverts) that spam their News Feeds with irrelevant promotional guff, deals and offers at a frequency greater than even the formidable, self-promoting Gap spams their email inbox.

Pretty much the only things people have found entertaining on Facebook lately have been the “‘engagement bait’ posts that are typically funny or controversial viral posts which encourage engagement primarily using Reactions. Bye bye fun stuff. Facebook doesn’t like you anymore, says you’re not doing us any good, which would be funny if it were not that Facebook created the options like Reactions in the first place.

Facebook says it makes all its changes in order to improve the experience for users (the people), and in pursuit of it’s aim to bring people closer together and to build relationships.

But Sean Parker, founding president of Facebook, was quoted in a Guardian article “‘Never get high on your own supply’ – why social media bosses don’t use social media” last week saying:

“The thought process that went into building these applications, Facebook being the first of them … was all about: ‘How do we consume as much of your time and conscious attention as possible?’ “

It’s all about keeping them coming back to Facebook for more.

But fewer and fewer people are posting original content, and they are engaging less with content shared by friends and Pages. The Independent reported on the phenomenon known as ‘context collapse’ back in 2016 claiming that Facebook is “terrified about a disturbing trend that is seeing people share information about themselves less and less”.

Users have discovered that they won’t see stuff from the Pages they liked. And yet their News Feeds are still stuffed with ads. Some better targeted than others.

Wired magazine puts it quite simply:

“Facebook’s latest update to its news feed algorithm comes down to one key factor: people don’t like using Facebook anymore.”

Facebook creates opportunities for businesses to use ‘free’ stuff that initially helps the business, but Facebook’s ulterior motive is always to better their own cause (i.e. revenues) more than helping the businesses that use its features. Some might even call it a ‘drug dealer model’. Some examples:

The list goes on and on. The fact is Facebook creates the ‘opportunities’ dressed up as something innocent and good for business and the world, then changes the rules on a whim. And you can’t blame them, they’re only doing what they need to in order to make more money, and they’re doing it exceptionally cleverly.

I view Facebook’s recent big announcement about the culling of organic reach much like the way I view the Gmail Promotions tab: Google doesn’t charge brands to allow their emails to be received by Gmail users. Sure, they scan the email content to profile the user so that other brands can advertise to those recipients either within Gmail or elsewhere across Google or the web. But the actual emails are free for brands to advertise their wares. Cue Google’s Promotions tab which “declutters a user’s primary inbox” in a bid to rid the world of unwanted, spammy-type promotional emails (thinly veiled code for “we want advertisers to pay their way, not get free reach”).

Facebook is exactly the same. They don’t make a dime from organic posts. In fact it costs them to run the platform, just like it costs Google to run the Gmail platform. Facebook is a business that serves its shareholders first and foremost. It’s not a charity or a social/community cause despite Zuckerberg’s frequent claims that he wants to “connect the world”. This is just corporate fluffy language to make them sound like a force for good. They are not a force for good, they are a business out to make money. Period.

So Facebook, confronted with a diminishing inventory of space in the News Feed in which to sell ads, had to do something. But it had to do something  under a guise of doing the right thing for people and society, not for business. Hence Zuck’s big announcement. Make no mistake though, despite his claims to the contrary this is 100% about ensuring there’s enough ad inventory to satisfy the demand of advertisers while they build their Watch video service and associated ad inventory and capabilities.

What does Facebook need in order to keep investors happy?

Since when did Facebook need to use Google AdWords (or more specifically Google Display Network) to drive new signups to Facebook?

I was actually pretty shocked to see this in a mobile app recently. But then it dawned on me. Everything started to make sense. Facebook’s growth (and even retention, measure in MAU or DAU) is likely tailing off, perhaps significantly so, in some key markets. Perhaps those key markets that have been so seriously divided by recent major political events, fuelled by Facebook?

Facebook’s engagement is dead as a dodo

Facebook will probably massage the numbers when they report Q4 2017 earnings tomorrow. They have a history of reporting the numbers that suit them, so we might be left guessing.

For example, a couple of years ago they wanted to prove how their mobile strategy was playing out brilliantly after playing catch-up because they hadn’t taken mobile seriously for years. So for a few quarters they released figures on mobile users, saying at one point that 84% of Facebook users access from a mobile device. That was a great bit of data which served them well in cajoling advertisers to place ads in the mobile News Feed. But I challenge you to find up-to-date figures on mobile usage from Facebook in any of their recent earnings reports. It doesn’t exist. I know because, like the sad old git I am, I’ve actually read them! Facebook quietly dropped this key metric making it harder for us marketers to truly understand the opportunity in any more detail than “f**king huge”.

But look, they’ve already warned us that engagement and time on Facebook is likely to be affected following their News Feed changes this month. While those changes won’t officially impact the last quarter’s data I reckon it was Zuck’s way of softening the blow in advance of the Q4 results because let’s face it, we know people are not engaging on FB so much. Moreover they’re not posting on FB as much. It’s degenerated into this shit-show of shared viral posts, fake news and crappy ads.

So even if I’m wrong tomorrow, there’s a good chance I’m actually right. It’s just that Facebook won’t tell us the full story.

Why this actually matter to marketers either way

Facebook warned us back in 2016 that available ad inventory was reaching its peak. We also know that the average price per ad leaped by 35% in the Q3 2017 quarter. If time spent on Facebook drops as suspected, that can only mean one thing: even LESS ad inventory and therefore even HIGHER ad prices.

I can pretty much guarantee that Facebook Ads will cost you more going forward, if you choose to continue advertising on Facebook, that is. Because the time is coming when one day people will say “these numbers just don’t stack up anymore”, so for goodness sake make sure you know what you’re doing with Facebook Ads! It’s too easy to burn a crapload of cash.

So there you have it. If you still believe that ‘Facebook Zero’ is anything but a ploy for more of our marketing dollars, I’m sorry, but you’re delusional.

Okay, I know I’m being cock-sure and “rantyman” about this. Enough! Tell me what YOU think. I’d really love to hear your views on any of this stuff down in the comments below. Go on, you know you want to join in the fun…

Since writing this article Facebook reported earnings and yes, you guessed it, I was right (smart arse!). Growth slowing, engagement down (quite noticeably in US and Canada) and earnings up. I’m not going to dwell on these points because they’ve been covered by every major media channel and publisher around the world. Instead I wanted to pick out something I found interesting in the way Mark Zuckerberg posted about the quarterly earnings on his Facebook profile:

No big deal so far. Zuck already said all this stuff previously when he announced News Feed algorithm changes in early January. I’m sceptical (as you’ve already read) that Facebook’s motivation is about them, not us.

But it was the following comment on Mark’s post by Matt Navarra, editor at The Next Web, which really resonated with me:

I felt compelled to voice my support for Matt’s comment with my own little suggestion for Zuck, just in case he was listening (yeah, right):

Turns out Zuck WAS listening. Well, maybe not to me but he was certainly paying attention to the thread. Matt’s comment sparked a rare and surprising response from Mr Z (his only response to his whole post): 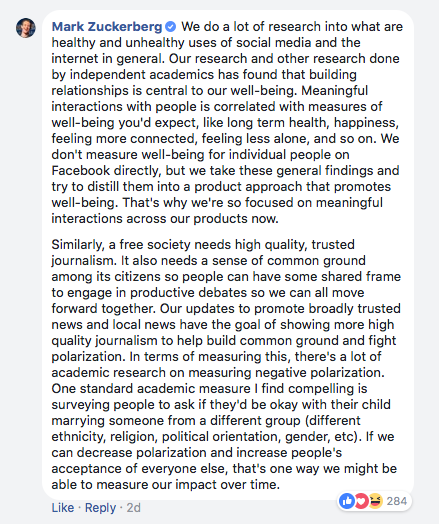 Seems like his cage was rattled a little! Still no indication that Facebook’s research might be published though so we’re left wondering what and how Facebook determines well-being. One last pop at him for good luck. I attempted to tag him but, surprise surprise, I couldn’t:

I won’t hold my breath, but I really, REALLY want to believe in Zuck. I want him to be a force for good. I want to see him follow-through on his words with conviction. Crikey, I’d like to see him as POTUS (surely he’d be better than the incumbent?!).

Let’s see where this ends up. Maybe, just maybe, we’ll see Facebook become more transparent about its research and studies in the future? If it’s not done voluntarily I can’t help but imagine it’ll be enforced through regulation of one kind or another, including perhaps breaking up Facebook’s business…