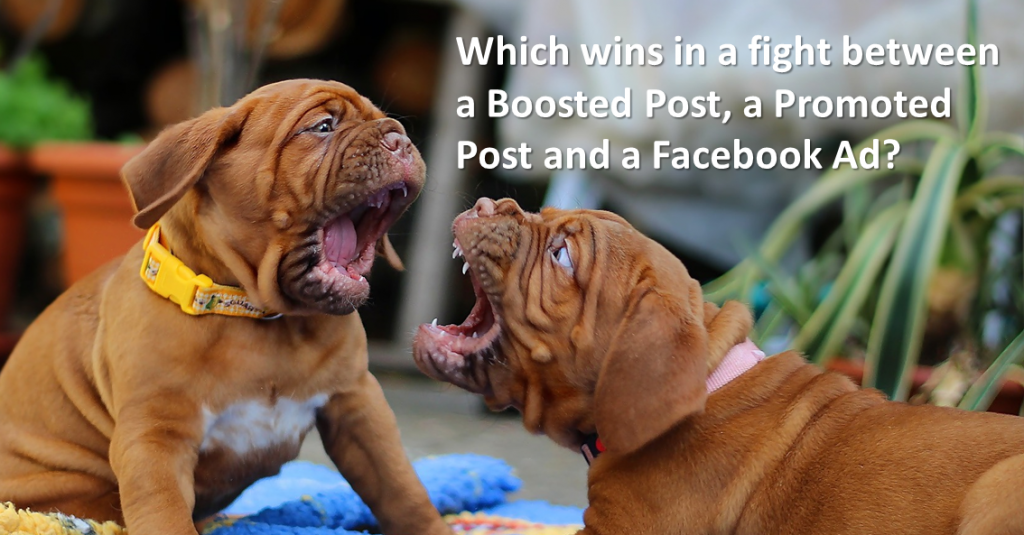 The choice of boosting an organic post from the Page or alternatively going into Ads Manager and creating as a promoted post (or indeed creating an entirely separate ad) is a hot topic of debate amongst Page admins.

It’s an increasingly important question in an era of what is effectively ‘pay-to-play’ on Facebook. Without the boost the likelihood of even 10% of your fans seeing the post is pretty low.

On the one hand it is super quick and easy to hit the boost button (the boost tool is a simplified version of what Ads Manager offers) but are there any downsides? Does the ads algorithm penalise boosted posts in any way?

First of all, if you are not clear on the differences between the three methods of boosted post, promoted post and link ad, check out this blog post.

But what we are going to do here is report on an experiment I have run in conjunction with my friends from clockworkTalent to ascertain which is the best method in terms of performance.

We ran a split test between boosted posts, promoted posts and Facebook ads to see which got the best reach and engagement. We took two different posts and performed the three-way test on each of those.

As you can see from the illustration below, each piece of content was identical. The only difference was the promotional mechanic. We used the same objectives, the same budget, the same placement, the same optimisation and the same targeting. We also started and finished each campaign at the same time. 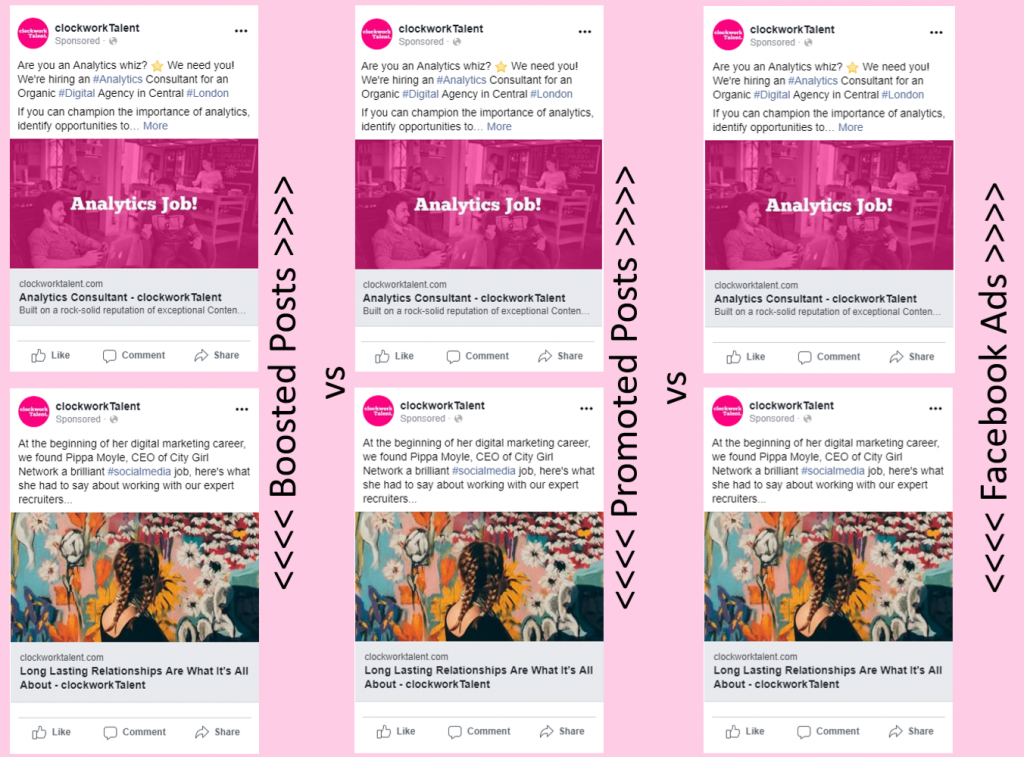 Here are the specifications:

What are the non-performance downsides of using a boost?

Boosting a post is nice and easy. You need no knowledge of Ads Manager and nowadays you get quite a few targeting options.

There are some downsides though. With a boost, whatever metadata Facebook drags through from the landing page is what you are stuck with in terms of the url that is shown and the headline (unless you have domain verification set up which most Pages do not). It also no longer pulls through the sub head copy (known as the News Feed Link Description). You can see below how these elements are created in Ads Manager to surface on the resultant ad. 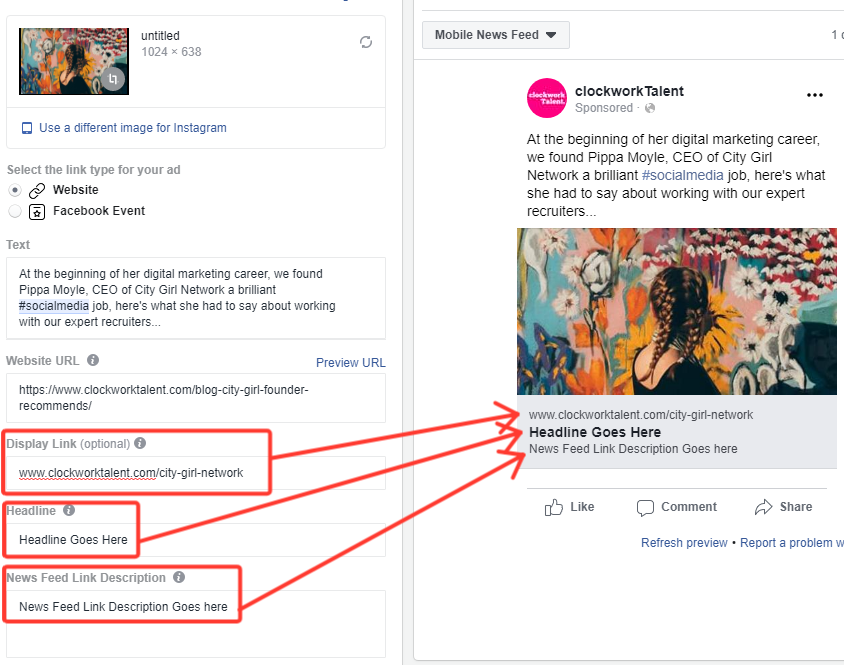 In order to create identical split tests, we did not utilise these additional features and instead simply replicated what appears in the boosted post but in the real world these provide a significant advantage over a boosted post.

I first did this experiment back in early 2015 and at that point boosted posts were the clear winners for reach providing double the reach for the budget. I then repeated the experiment later that year with a different Facebook Page. Again the boosted post was the winner outperforming the promoted post on every metric.

At that time the cost to reach people was more than double when using an ad over a boosted post (and nearly double with the promoted post).

But this newer 2018 experiment has a very different set of results.

There is really no consistent discernible difference in reach between the three types of promotion. The cost to reach each fan is broadly similar (with one outlier – the promoted post for the job ad) coming in generally at just under 2p per person.

What is clear is that organic reach is virtually dead. Neither of these posts achieved even 3% organic reach (and this is with a very small Page which we would normally expect to enjoy far higher than average reach figures). The addition of just £5 pushed reach from under 3% to 20-24%. That budget also drove a healthy number of actions (clicks, likes, comments shares) which will also have helped with viral reach. Promotion also pushes the frequency from zero or one to many people seeing the content more than once.

Can this research be relied on?

Given this was a very small scale experiment, and the Page in question has only 1,148 fans then I would urge caution when reading the results and applying them wholescale to your own situation. The budgets were very small and I would like to repeat the experiment with a much bigger Page and with a larger budget. If you would like to volunteer your own Page then let me know!

These are not difficult experiments to carry out – maybe an hour to set up and a half hour to evaluate the results. As with all things digital you should be continually testing.

I decided to repeat the experiment using a larger Facebook Page. Musicademy has nearly 16,000 fans and operates internationally.

This time I targeted fans in six countries: UK, US, Canada, Australia, New Zealand and Singapore. I did not restrict by age (because this isn’t given as an option on the boosted posts – another downside to boosting) and this time I used a video post. The post would have interest to certain fans as it was a free lesson taken from an online course that would normally be paid for. As such it was a relatively lengthy video (11 mins 40) – certainly not designed as promotional eye candy. 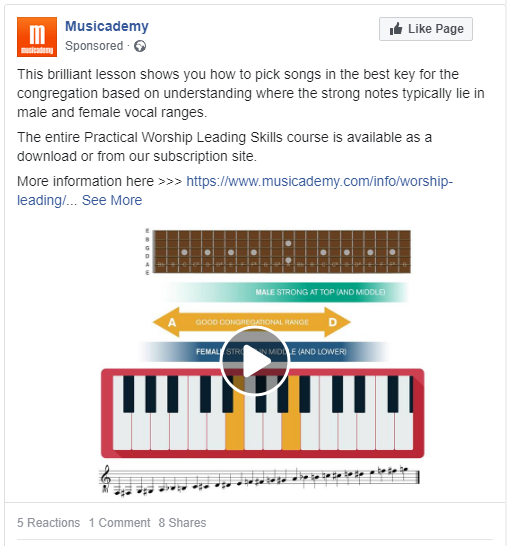 With this video post each variant had the video views objective and was optimized for 10 second video views.

The only other major difference was that the original post had been made a few weeks before so already had reached 2,130 people (a reach of 13.4%), obtained 667 views (258 of which were 10 second or more views) with an average watch time of 23 seconds. It also had a small number of reactions, comments and shares. This social proof will, arguably have encouraged fans to view (a benefit the ad would not have shared). This discrepancy, however, reflects real life in that Pages will typically let a post gain traction organically before boosting, promoting or creating and ad

Placement this time was News Feed only. Again no calls to action were used. $10 per variant was spent over two days.

The potential reach this time was significantly higher – some 12,000 people. Estimation of reach prior to the campaigns going live varied very slightly in that it appears that Facebook did not expect the Promoted Post to perform as well:

I thought it would be interesting to have a look at how Facebook’s predictions for my ad spend actually worked out.

The table below shows that reach figures were met, albeit somewhat on the low end of predictions. And two of my three ad types enjoyed results a little above the bottom end of Facebook’s predictions. (Note that FB provides estimated daily results. I have doubled these to produce an estimated 2-day campaign result.)

The results for Musicademy

With this larger Facebook Page and consequently larger target market we have some more robust results than we did for the clockWork Talent experiment.

The original post had enjoyed a reach of 13.41% prior to any promotion taking place.

At first glance the Boosted Post appears to have performed the best reaching 10.47% of the full fanbase (remember though that we were in fact only targeting certain countries within the fan base so % reach of the target market is higher than the figures below). There were also considerable more actions for the Boosted post than the Promoted Post or Ad.

The Promoted Post performed the worst of the three variables on reach, impressions, results and actions. As such it’s cost per person reached was higher than the other two.

Interestingly the identical content received different relevance scores – the boost had a score of 7 and the promoted post and ad enjoyed a score of 8. In theory a lower relevance score should drive reach down and costs up but clearly the boost did perform well. The boost also had the highest frequency score – might this also have contributed to it’s improved results?

So what should you do? Boost, promote or create an ad?

Given the findings of both experiments I would now avoid promoted posts. Either hit the boost button or create a separate ad.

The ad option, whilst time consuming does have the advantage of additional functionalitys. Taking advantage of those things (Headlines, News Feed Link Description, Display URL, split testing or images and copy) as well as enhanced targeting will all result in a performance benefit. For Musicademy in particular the ability to target by age is important. You can’t do that with a boost (unless you run the boost then hop across to Ads Manager to tweak the targeting which kind of defeats the object of using the quick boost button).

As we ignored all those features in our experiment in order to deliver a truly split test our results show no major discernible differences in terms of performance but integrate them into your campaigns and you will start to out perform boosts.

The only downside to my mind of creating separate ads is that you won’t get the social proof (likes, comments, shares) that the original post enjoys. This could be an important factor in driving interactions and improving results. 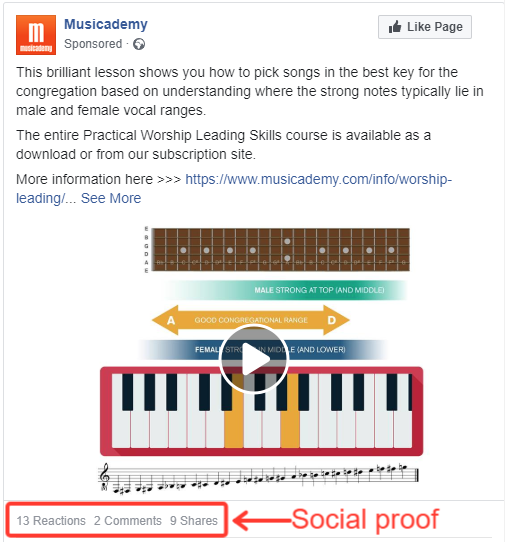 Marie Page is one of the UK’s leading Facebook marketing experts. She is a founding partner of digital marketing consultancy The Digiterati and the Digiterati Academy e-learning portal for marketers and entrepreneurs. Her award-winning Master's Dissertation was the culmination of three years' academic research into Facebook that resulted in a book (and companion online course) 'Winning at Facebook Marketing with Zero Budget' that became an Amazon bestseller. Marie's work on the Facebook News Feed algorithm was featured in The Huffington Post. A recognised thought leader on social media, Marie is often approached by journalists for comment in articles such as this Telegraph article. She was also interviewed for ITV's Tonight show on Facebook privacy issues in relation to advertising. Marie is a regular guest on digital marketing blogs and podcasts including Social Media Examiner and Smart Insights. In 2018 she is speaking at Brighton SEO, Europe's biggest search and marketing conference. Marie is also author of two Smart Insights books: 'Smarter Guide to Facebook Marketing', now in its fourth edition, and 'Facebook Ads Guide', both edited by Dr Dave Chaffey. Marie is also a part time yoga teacher.
89
shares
ShareTweetLinkedIn
PrintEmailBufferPinterestStumbleupon