Not content with being the second largest search engine, earlier this year YouTube beat Facebook to become the most visited social media site in the US.

Yes, you read that right. Research from Compete PRO, which operates one of the largest consumer panels in the US, indicated that unique visitors to YouTube edged ahead of Facebook by over 1.3m visitors in June 2014. While this may come as a surprise to many readers, it’s been on the cards for some time as this graph from Compete illustrates: 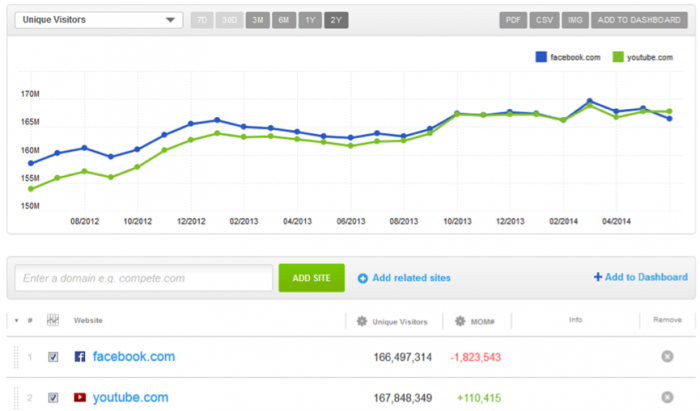 You can see that YouTube and Facebook had been slogging it out over the previous few months but finally sometime between May and June this year YouTube got the better of them.

This news mostly slipped under the radar at the time, mainly due to the way the major research and data providers aggregate all their figures for Google-owned sites rather than separately reporting data for the Google and YouTube domains. For example, comScore include YouTube visitors in their “Google sites” data: 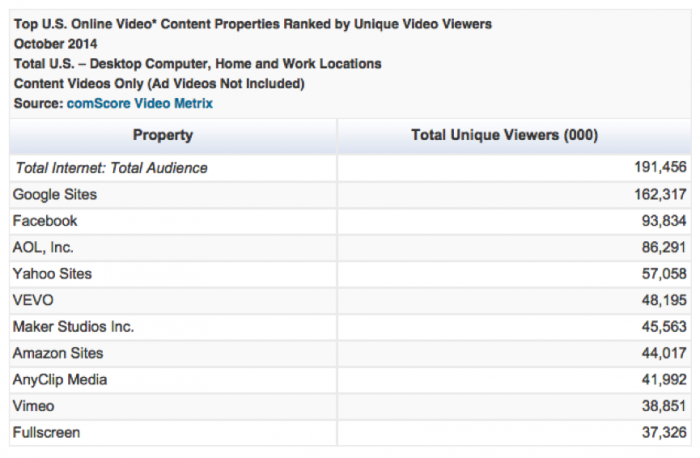 However, research just published by GlobalWebIndex corroborates ComparePRO’s findings and goes one better, claiming YouTube has more visitors than Facebook worldwide (excluding China). The GWI Social Q3 2014 report indicates that while Facebook may have more members and active users it’s YouTube that takes the trophy for the highest overall visitor rates with 85% of online adult visitors compared to Facebook’s 76%. 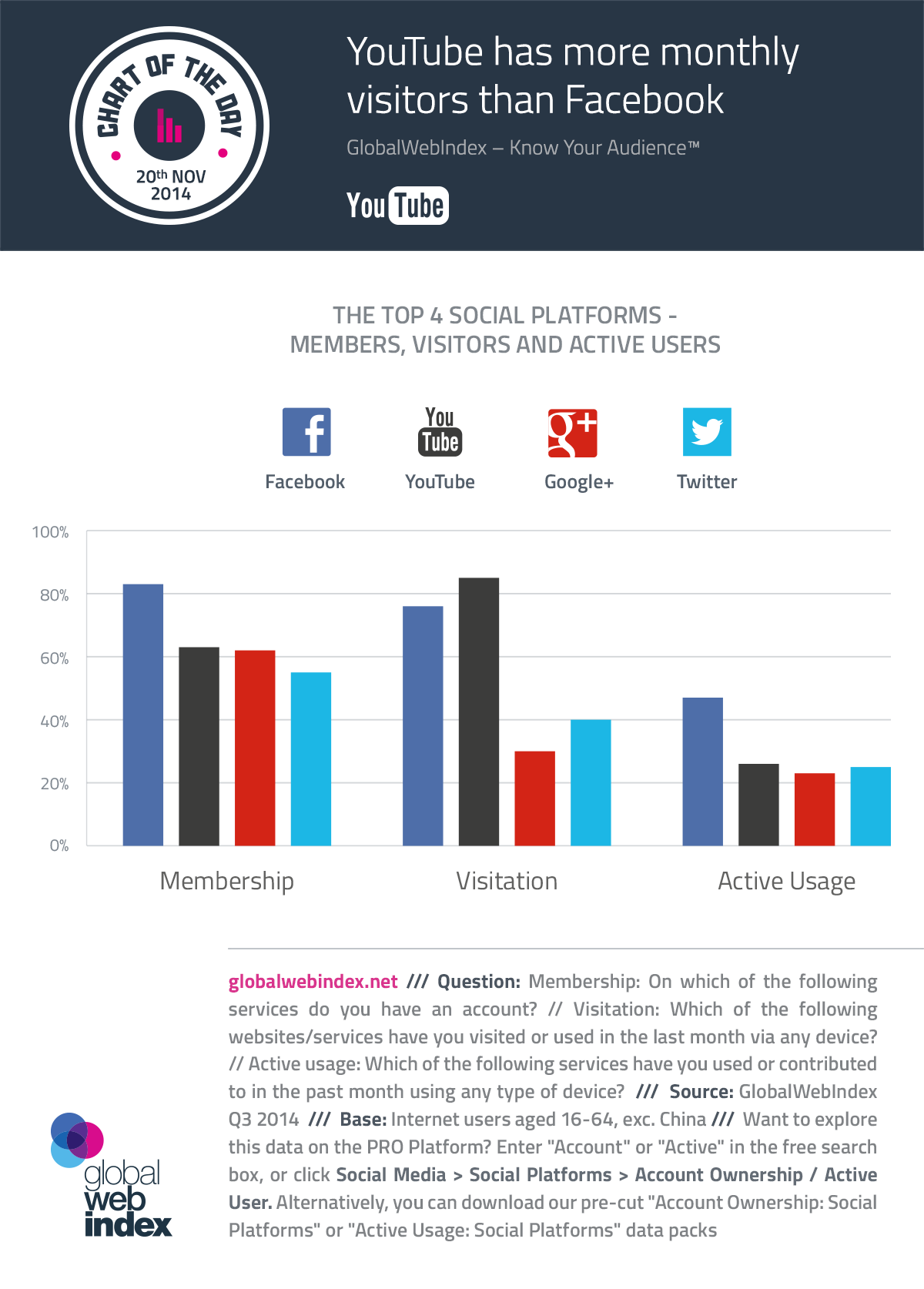 So if this is true why is YouTube’s huge popularity not featuring heavily in social media and digital marketing headlines? It may be down to the way people think of YouTube…

There’s some debate on whether YouTube should even be regarded as a social network. I’m absolutely of the opinion it is a social network but many consider it simply as a video-sharing site – a utility – which of course is exactly what it is. But isn’t YouTube much more than that? Let’s see how the simple definition compares with some of its peers in similar or adjacent media categories…

Pinterest is a place where users can “upload, save, sort, and manage images—known as pins—and other media content (e.g., videos and images)”

If all the above are considered social media sites (which they most certainly are) then YouTube should easily fit the criteria. If you’re still in any doubt consider that YouTube is a (largely) free service that anyone can join and where users can perform the following actions:

Now doesn’t that sound very much like every other social media site? I rest my case!

Facebook fights back by boosting videos in the news feed

All this news might have come as a surprise to many of us but it certainly didn’t to executives at Facebook where they’ve been quietly working on improvements to Facebook’s video product for many months. But it seems YouTube out-ranking them for overall visits was the straw that broke the camel’s back.

Facebook’s June announcement of significant updates to video in the news feed coincided with the YouTube out-rank news in what can only be viewed as a  complete coincidence. The update gave significantly greater weight to videos in the Facebook news feed algorithm (commonly known as EdgeRank) meaning simply that people would see more Facebook videos appearing in their feed.

Then just a few weeks later they announced further updates to Facebook video causing videos to auto-play in the news feed for everyone (a feature they had drip-fed in beta testing since late 2013), adding an indicator of the number of views and providing brands with free ways to add a call-to-action. 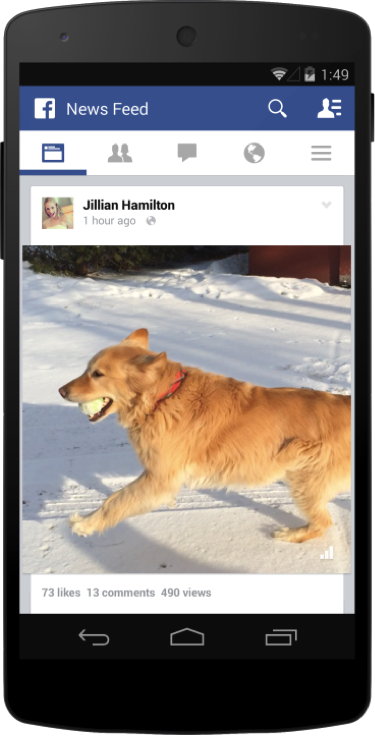 Socialbakers data suggests this has all worked out perfectly for Facebook. In November more Page owners uploaded video directly to Facebook than they did via sharing from YouTube videos.

This is a huge turnaround which underscores Facebook’s reign over Page owners; they have increasingly starved Pages of organic reach and this was the super-sized fast-food meal deal they craved to keep them sweet. If like me you’ve noticed a massive influx of videos from Pages in your news feed it suggests they’re being rewarded for their efforts.

Facebook means business – and they are showing clear signs of putting up a fight for market share of online video visitors and views. After all, more video views on Facebook leads to more time on site and ultimately more advertising revenue.

But hang on, where’s all the YouTube referral traffic?

Okay, so Facebook is huge and has its eye firmly on YouTube. But for years we’ve known YouTube is a top contender in search and THE destination for video search – something Facebook is definitely neither. But for all their effort brands, businesses and marketers have mostly struggled to gain any measurable traction beyond video plays and likes. And by ‘traction’ I mean referral traffic, because driving people to our website, ecommerce store or blog where they can buy or sign-up is more often than not where we derive some real value.

So it’s really disappointing that – on the whole – such little value is directly referred by YouTube.  Take a look at this snapshot of social referral data from a brand I’ve worked with recently which is fairly typical of most I see: 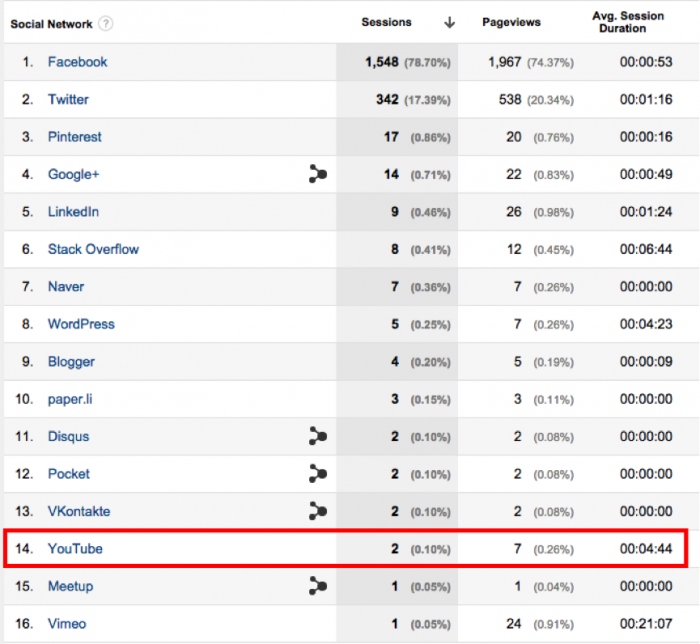 YouTube is right down towards the bottom and frankly barely worth including in the list. Its only saving grace is session duration which beats Facebook hands-down, although with such tiny numbers it’s a near-useless guide.

It’s easy to see why Facebook is en-vogue when you look at data like this; all the other social networks combined don’t come close to Facebook for referral traffic. There are of course many reasons for this – not least that the data represents referrals from all types of Facebook content and not solely video content, so it’s not really comparing apples with apples. Plus way more effort (and advertising budget) is commonly put into Facebook by brands than other social platforms.

But it would be nice to get some referral traffic for our YouTube efforts, wouldn’t it?

In my next YouTube post I’ll show you how to significantly increase referral traffic from YouTube videos with a quick and simple trick. Hint: it doesn’t cost a penny.

If you’d like to learn more Carlton is running a series of training masterclasses in 2015 on YouTube, video marketing and social media marketing. Click here for more information.

This post by The Digiterati co-founder, Carlton Jefferis, originally appeared on Smart Insights