We are always on the lookout for  factors that affect the Facebook algorithm (the many thousands of factors that determine whether Facebook decides to show a post to your fans or not).

One factor that we are aware of is the need to avoid certain trigger words that appear to result in reach being choked. Typical examples are words like “Free”, “Like”, “Share”, “Buy”, “Sale” are obvious reach killers. Facebook dislikes brands trying to force reach (“Like” and “Share” being obvious examples). It also clamps down hard on what it sees as promotional content. So words like “Buy” and “Sale” are obvious indicators of that.

We posted an update recently about a new ad format coming to YouTube. It was a link to a reputable media/publishing site which traditionally would get us pretty decent reach.

I was therefore pretty shocked to see that 9 hours after posting, the post had been seen by only 9 people. Yet a similar post a few days ago was seen by 133 people (as a newish Facebook Page we have fewer than 500 fans so reach of 133 giving 30% reach is way more as a percentage than most Pages achieve nowadays). Both were links to news/publishing sources and both were on non Facebook social media topics – both of similar interest to our fan base. See the two posts below and the vastly different reach figures. 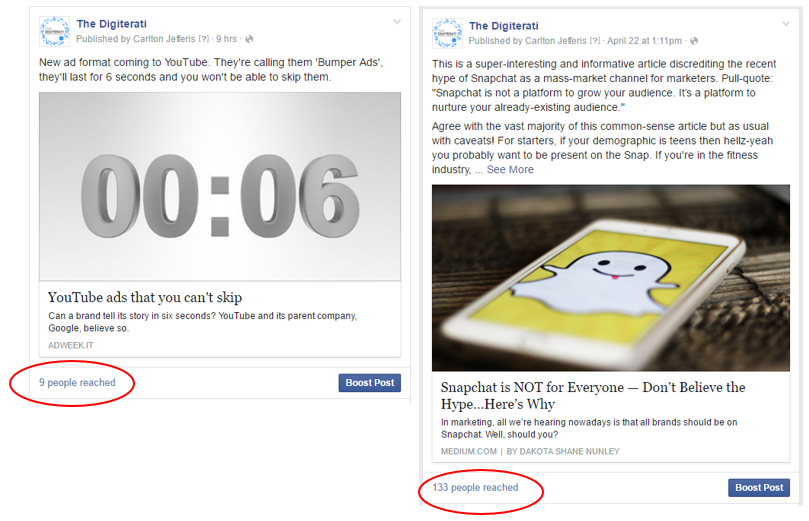 I think it’s unlikely to have been the initial engagement on the post – for the first hour it was shown to just 3 people – even Facebook isn’t going to gauge interest in a post based on a sample of 3 people. Sure the images were different, the subject matter different, and the landing pages different – so it could have been any of those things but my hunch is that the algorithm is designed to restrict reach on posts that talk about YouTube.

YouTube was used in three places on the post, including the title. We know that Facebook hugely favours natively uploaded video to YouTube clips. It sees YouTube as a major competitor in the social/online space. So not surprising really that it would choose to squash mentions of it in posts.

But what do you think? Is there something else I may have missed?

Marie Page is one of the UK’s leading Facebook marketing experts. She is a founding partner of digital marketing consultancy The Digiterati and the Digiterati Academy e-learning portal for marketers and entrepreneurs. Her award-winning Master's Dissertation was the culmination of three years' academic research into Facebook that resulted in a book (and companion online course) 'Winning at Facebook Marketing with Zero Budget' that became an Amazon bestseller. Marie's work on the Facebook News Feed algorithm was featured in The Huffington Post. A recognised thought leader on social media, Marie is often approached by journalists for comment in articles such as this Telegraph article. She was also interviewed for ITV's Tonight show on Facebook privacy issues in relation to advertising. Marie is a regular guest on digital marketing blogs and podcasts including Social Media Examiner and Smart Insights. In 2018 she is speaking at Brighton SEO, Europe's biggest search and marketing conference. Marie is also author of two Smart Insights books: 'Smarter Guide to Facebook Marketing', now in its fourth edition, and 'Facebook Ads Guide', both edited by Dr Dave Chaffey. Marie is also a part time yoga teacher.
79
shares
ShareTweetLinkedIn
PrintEmailBufferPinterestStumbleupon