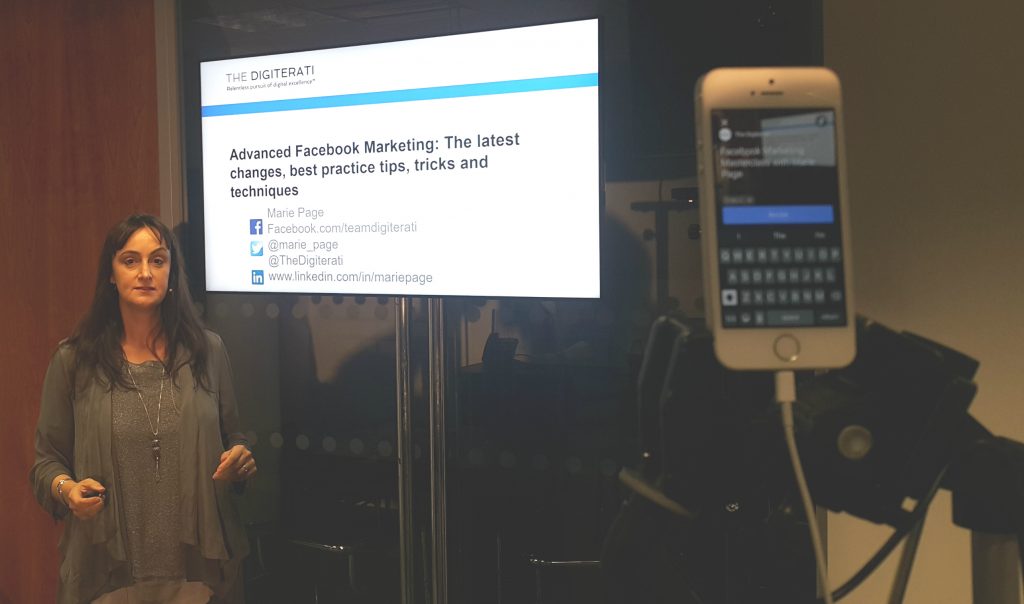 I guess lesson number one should be:

“Don’t Live Broadcast mere hours after crying buckets at a harrowing funeral”. But I guess that’s not a circumstance of relevance for most potential Facebook Live users.

At The Digiterati we’d had an evening Masterclass scheduled in with sound engineering company SFL for months and with the recent arrival in the UK of Facebook Live it seemed a great opportunity to do our first official live broadcast. I (Marie) was prepped and ready but for the tragic funeral that I needed to attend earlier in the day. It meant for a somewhat wrung out appearance and a head that was not exactly as focussed as usual. We decided to go ahead but I was particularly aware during the broadcast that my heart was heavy and it was hard to concentrate on something as seemingly trivial as social media in the light of what I’d experienced earlier in the day.

But having said that, there were a number of things we learned actually about Facebook Live that I thought I’d share with you in the form of some top tips. Also some reflections as an educator that some might find insightful.

I’ve already written an article on 12 tips for using Facebook Live. So I’m not going to repeat those here. Instead hear are some recommendations based on what we learned during the broadcast. You can watch the broadcast here. The slide deck is available here. 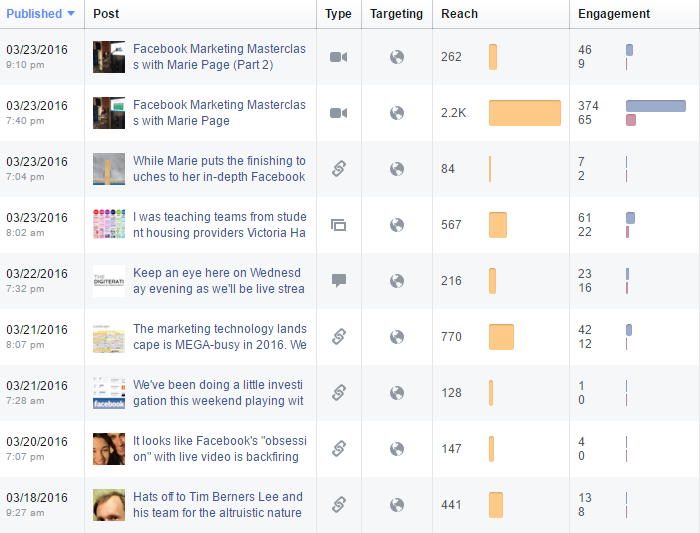 As an educator, I’m ultra self critical of how a session went and this was far from ideal. Firstly I had the aforementioned emotional trauma to deal with so I was somewhat distracted and less focussed than usual. Secondly my audience ended up being a lot less experienced than I had expected. The previous week I’d taught a similar session to a group of relatively seasoned Facebook marketers, so I’d gone in (to this advertised Advanced workshop) with tricks, tips and best practice that assumed a relatively advanced usage of the platform.

It became apparent that most of my physical audience were managing extremely small Pages (fan numbers in the hundreds) and would likely be blinded by me using much technical jargon or by going too quickly. In retrospect I would have prepared a different session which was more basic, but given the slide deck I had before me, and a couple of thousand people possibly viewing on line I felt I needed to go with the plan and simply encourage my audience to ask questions if they needed extra clarification.

As I delivered, I felt quite torn by wanting to work with my physical audience and also deliver to the virtual one. Inevitably I think I ended up compromising both audiences. I sensed their needs were somewhat different but in my mind took a decision to focus on the people in front of me. As such I suggested asking questions as we went along as well as a general Q&A at the end.

And of course the sales messages that I wanted to weave in from The Digiterati were quite different for the two audiences. We’re in the process of launching a comprehensive package of Facebook support options. These would probably be perfect for much of our online audience, but my Reading audience of non profits and tiny Facebook Pages were very much in the DIY camp – which is fine – I love working to support these scenarios but it would have been inappropriate to have talked about our new “Done for You” Facebook ads service to an audience with barely the budget for boosting posts.

I concluded the evening by asking each audience member in turn to share what they had found particularly useful about the session. This is included in the second broadcast here. I always love doing this but not always possible with a large group or where time is precious. It ends the evening on a nice warm and fuzzy note – not just for me but psychologically everyone has reflected on the positive outcomes for them and hopefully concluded that it was worth their time. It also gives me helpful insight on how I would address a future audience with a similar make up.

On looking through the (brand new) video metrics the following day it was clear that viewer retention really dropped after 30 minutes. In that sense a broadcast of a lengthy presentation is not ideal but is a great option for those that really do want the content but are unable to get to the live event. We’ll be experimenting in future with some shorter office-based broadcasts designed specifically for the online audience.

If you missed out and would like in-company  Facebook training for your team, check out our bespoke service.

Marie Page is one of the UK’s leading Facebook marketing experts. She is a founding partner of digital marketing consultancy The Digiterati and the Digiterati Academy e-learning portal for marketers and entrepreneurs. Her award-winning Master's Dissertation was the culmination of three years' academic research into Facebook that resulted in a book (and companion online course) 'Winning at Facebook Marketing with Zero Budget' that became an Amazon bestseller. Marie's work on the Facebook News Feed algorithm was featured in The Huffington Post. A recognised thought leader on social media, Marie is often approached by journalists for comment in articles such as this Telegraph article. She was also interviewed for ITV's Tonight show on Facebook privacy issues in relation to advertising. Marie is a regular guest on digital marketing blogs and podcasts including Social Media Examiner and Smart Insights. In 2018 she is speaking at Brighton SEO, Europe's biggest search and marketing conference. Marie is also author of two Smart Insights books: 'Smarter Guide to Facebook Marketing', now in its fourth edition, and 'Facebook Ads Guide', both edited by Dr Dave Chaffey.
43
shares
ShareTweetLinkedIn
PrintEmailBufferPinterestStumbleupon