I wrote a blog post a few weeks back called 16 reasons to use Power Editor when creating Facebook Ads. All was going well until I was busy creating a new ad in Power Editor yesterday and found yet another new feature. As I said in the original blog post, Facebook rolls out new features to Power Editor users first so here’s the latest new cool tool:

[Note: Facebook no longer uses Power Editor, instead it has a powerful new Ads Manager. Automatic ad and ad set naming is very much part of that tool]

Ad and ad set naming conventions on Facebook have always been something of a dog’s breakfast. Facebook has never really guided you on how to name your ads and ad sets and as a result most users make a total mess of it. It’s particularly challenging when you are running maultiple campaigns, ad sets and ads.

To simplify reporting I’ve traditionally tried to include as much information in the name as is helpful for when I come to review ad effectiveness. So I’ve traditionally included things like targeting details, bid type, creative variant and other similarly useful differentiators. You can then filter using these in the reports. But for a lot of clients, just getting to grips with all the other advertising options is enough of a headache. so naming conventions tend to be something of an afterthought or a “will do better next time” reflection after the campaign.

But now Facebook has come to the rescue. On Power Editor at least.

This is what popped up when I was busy cloning an Ad Set yesterday:

Clicking through gives you a really nifty little naming wizard: 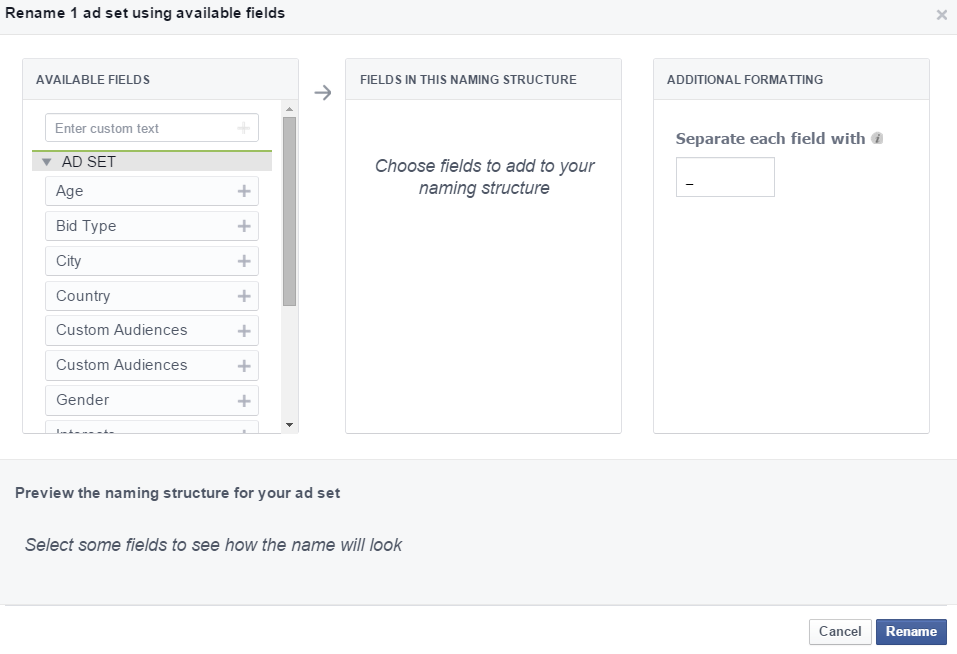 Here are the fields I chose for my ad set: 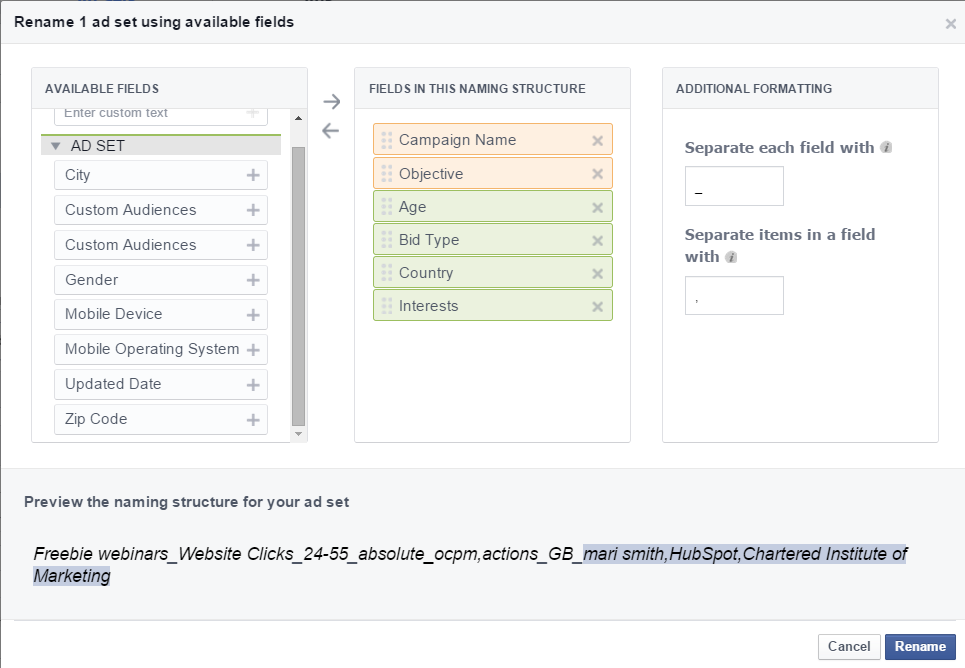 Marie Page is one of the UK’s leading Facebook marketing experts. She is a founding partner of digital marketing consultancy The Digiterati and the Digiterati Academy e-learning portal for marketers and entrepreneurs. Her award-winning Master's Dissertation was the culmination of three years' academic research into Facebook that resulted in a book (and companion online course) 'Winning at Facebook Marketing with Zero Budget' that became an Amazon bestseller. Marie's work on the Facebook News Feed algorithm was featured in The Huffington Post. A recognised thought leader on social media, Marie is often approached by journalists for comment in articles such as this Telegraph article. She was also interviewed for ITV's Tonight show on Facebook privacy issues in relation to advertising. Marie is a regular guest on digital marketing blogs and podcasts including Social Media Examiner and Smart Insights. In 2018 she is speaking at Brighton SEO, Europe's biggest search and marketing conference. Marie is also author of two Smart Insights books: 'Smarter Guide to Facebook Marketing', now in its fourth edition, and 'Facebook Ads Guide', both edited by Dr Dave Chaffey. Marie is also a part time yoga teacher.
26
shares
ShareTweetLinkedIn
PrintEmailBufferPinterestStumbleupon