Finally. Insights for Facebook Groups is here. We have a Digiterati Academy Masterclass on it available now but for this post I’ve been playing around with trying to find the all important Reach metric from the (somewhat limited) stats available.

There are just two indicators of reach available currently. The first is “Active Members”. You’ll find this in the More Engagement Details section. Here’s the Team Digiterati data for the last month:

Facebook defines active members as those who have “viewed, posted, commented or reacted to Group content” during the time period in question. So a reach figure of sorts, but in a whole month any one member may simply have seen a single piece of content, so it’s not exactly a reach figure as we understand it from Facebook (Page) posts.

The next place to look is a little further down that section where you get to see the Top Posts from the time period in question. Here Facebook shows the top 10 posts – it surfaces the name and photo of the person who created the post, the number of comments it received, the number of reactions, and (crucially) the number of  eyeballs. Now I assume that the eyeball icon indicates unique eyeballs rather than cumulative views. Facebook doesn’t give a definition. But it’s the best we have by way of a reach figure.

Here’s how it looks: 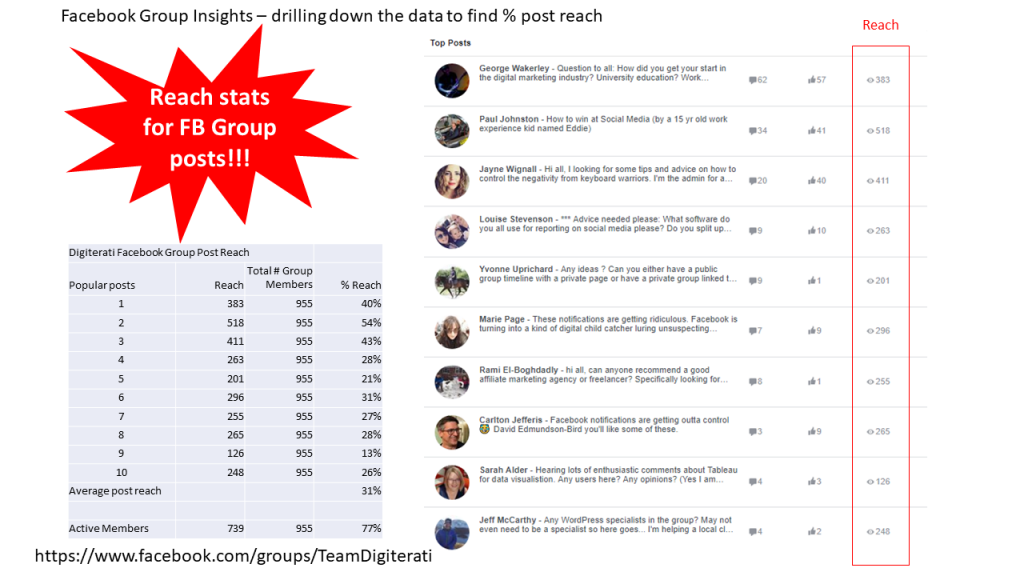 You need to do a little maths to work out the percentage reach (see my table on the left). Our top performing post (in terms of reach but not reactions and engagements) therefore enjoyed a reach of 54% with an average reach of 31% over the Top 10 posts.

My other Facebook Group (which has 2,500 members) achieved an average reach of 34% (top performing reach was 49%).

These figures are far from perfect. What about the posts that don’t make the Top 10? We have no idea what reach they achieve. And be aware that Facebook truncates the eyeball figure to the nearest hundred once it goes over a thousand views so the results may not be quite as pinpoint accurate.

But at least we have some data which shows how well posts are performing in Groups which is more than we have ever had before.

How does reach for Groups compare with Facebook Pages?

Well reach in Groups is a LOT better. Average reach on Pages at the moment is about 12% (recent Locowise study) although many Pages see significantly lower numbers than this.

Plus reach is CONSISTENTLY better, even the least popular Group posts are outperforming Page posts. In fact, Page posts that get little immediate engagement are rewarded with dire reach, well below the 12% average.

And engagement is considerably higher in Groups too. This has little to do with the algorithm outside of better reach levels but more the community feel of Groups lending themselves to more discussion and reactions. But as we know, engagement drives reach so the higher engagement in Group posts will be doing it’s bit to keep that content high in news feed.

Remember too that viral reach for high performing Page posts is significant. As most Facebook Groups are Closed or Secret there is no viral reach. So that means these organic (and non viral) Group reach statistics are even better than the numbers suggest as most Page reach data includes viral reach (which may or may not be going to your target audience).

So how does the algorithm differ in Groups to Pages?

There’s no doubt an algorithm at work in Groups and it shares a lot of core factors with the Pages algorithm which I explore in my book on the topic and our extensive course. The Group algorithm is, however, more generous. Unless you turn off Group notifications, you are way more likely to see Group content than that from Pages.

Groups feel to me, as an administrator, like Pages did about 6 years ago. Buzzy, engaged, not full of marketing content but instead genuine and useful discussions that both serve the user and act as a place for brands to engage (ideally without being spammy).

Groups are definitely the hot thing on Facebook right now. And if you’ve not considered them for your business, head over to our course The Essential Guide to Effective Facebook Groups for some inspiration and practical idea.

We actually have more members in our Group than fans on our Page and that’s fine. That’s where the action is and that’s where our community tends to go to learn, engage and ask questions.

And as should be obvious from the post data above, content is created by lots of people. In those 10 posts only two were by Group admins. We work hard to facilitate a valuable community of digital marketers rather than just curating a place to flog our stuff!

You can join the Group here.

Marie Page is one of the UK’s leading Facebook marketing experts. She is a founding partner of digital marketing consultancy The Digiterati and the Digiterati Academy e-learning portal for marketers and entrepreneurs. Her award-winning Master's Dissertation was the culmination of three years' academic research into Facebook that resulted in a book (and companion online course) 'Winning at Facebook Marketing with Zero Budget' that became an Amazon bestseller. Marie's work on the Facebook News Feed algorithm was featured in The Huffington Post. A recognised thought leader on social media, Marie is often approached by journalists for comment in articles such as this Telegraph article. She was also interviewed for ITV's Tonight show on Facebook privacy issues in relation to advertising. Marie is a regular guest on digital marketing blogs and podcasts including Social Media Examiner and Smart Insights. In 2018 she is speaking at Brighton SEO, Europe's biggest search and marketing conference. Marie is also author of two Smart Insights books: 'Smarter Guide to Facebook Marketing', now in its fourth edition, and 'Facebook Ads Guide', both edited by Dr Dave Chaffey. Marie is also a part time yoga teacher.
34
shares
ShareTweetLinkedIn
PrintEmailBufferPinterestStumbleupon