The fallout from Facebook Zero has been very varied between Pages. Some are reporting little difference, and some, like the Page we are going to feature here, are experiencing  huge drops in reach.

We were contacted a few days after the Facebook announcement of 11 January by Alexandre Cortez. Alexandre had grown a huge Page (I Love Pot) on the topic of recreational cannabis use (which of course is legal in some countries and on many others there is pressure to relax legislation) over a five year period using some smart organic tactics that drove his fan base to over 370,000 people from all over the world. He’d gone on to create four additional Pages for different cannabis niches as well as a Group of some 32,000 members with the objectives of getting closer to the community and helping push legislative changes.

But those previously smart organic tactics were starting to have the opposite effect. He reached out to us asking “I saw your article about the new Facebook update. Do you have any tips because my reach has totally broken down?”

And boy has his reach broken down. Within a few weeks the Page’s staggeringly good average reach of over 140% (yes you read that right) has dropped to less than 2% today.

With Facebook’s recent announcements we know that it has decided to prioritise posts from friends and family stating that it will “show less public content, including videos and other posts from publishers or businesses” so all Pages are going to be vulnerable to eroding reach but I Love Pot has seen its reach fall quite dramatically more than any other Page I have seen.

How one Facebook Page’s reach has dropped from over 140% to less than 2%.

We took a quick look at the Page and immediately identified a number of reasons as to why it had been hit so hard. But before I delve into them I guess I should really make a few points:

Back in early 2017 using Reactions as a voting mechanism was a highly effective means of gaming reach and engagement. Starting with static images and rapidly progressing to looping video and Lives, the Page would create a short looping video and ask people to vote. Here’s an example from Tropicana: 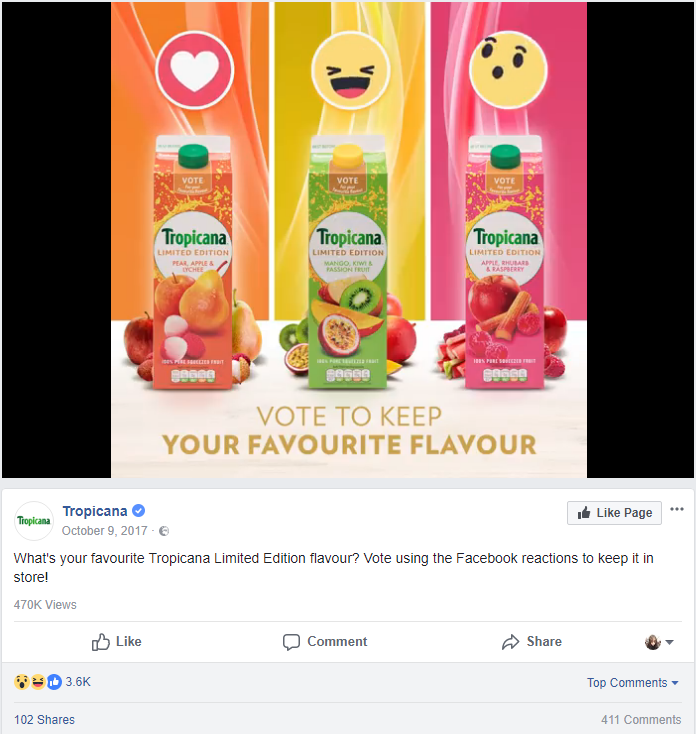 It was against Facebook’s Terms of Service. But hey, no one was being penalised, and it was having a fantastic impact on reach.

Alexandre’s team invested a huge amount of work on custom designing a tool that would embed Reaction votes into the video (and created some unique features which apps such as MyLivePoll did not have) and it was enormously successful. Until Facebook clamped down on the practice.

This video achieved 70,000 views and huge numbers of reactions. All super-helpful in spreading awareness about the Facebook Page:

According to Alexandre, fans really enjoyed voting and the approach was effective in attracting partner Pages to agree to “reciprocal sharing”. This reciprocal sharing (where another large cannabis-related Page would share I Love Pot’s video and I Love Pot would, in turn share a number of their posts) was instrumental in driving up reach (and fan numbers). But since Facebook has clamped down on Pages that use Reactions as voting mechanisms and reach has dropped, so too have the organisations willing to work with Alexandre’s Page.

Alexandre has generally posted something to the Page every three hours. In the data I looked at from mid 2017, the average was at least 5 posts per day and she’s ramped that up more recently to 7 times a day.

However, Adam Mosseri (FB’s Head of News Feed) has emphasised the need to focus on quality not quantity.

Facebook clamped down on this a while back. “Gaming” engagement using words such as “Like”, “Share” and “Comment” is going to see your content throttled by the News Feed algorithm. Although of course the engagements it does achieve still results in some reach as you can see.

Facebook’s recent announcement about the changes to News Feed included this warning: “We will also prioritize posts that spark conversations and meaningful interactions between people. To do this, we will predict which posts you might want to interact with your friends about, and show these posts higher in feed. These are posts that inspire back-and-forth discussion in the comments and posts that you might want to share and react to – whether that’s a post from a friend seeking advice, a friend asking for recommendations for a trip, or a news article or video prompting lots of discussion.”

There is very limited back-and-forth discussion in I Love Pot posts. Take this example below. It is certainly humorous and had achieved one share and a few likes but zero comments. Comments – and particularly deep and meaningful conversations within comments – are a key driver now.

Remember too that nowadays posts with poor engagement will effect Facebook’s view of the Page (and therefore the success of future posts).

I’m not going to share images of the posts that got a lot of negative feedback (complaints and hides) in recent days because way too many people would find them offensive. But in the last week, the posts featuring bad language and photos of women in highly sexualised positions have driven more negative feedback than usual. This will have limited the reach of both those posts and likely affected the Page into the future.

A look at the data

I downloaded 3 months of Insights data from mid 2017 and analysed average reach as a percentage of fans. During that time the Page grew organically from 24k to 32k fans (HUUUUGE growth!) with absolutely zero paid promotion whatsoever (so no revenue for Facebook!).

There were 500 posts in total (over 5 per day). The majority were photos, about 20 videos from the Page itself and 50 shared videos. There was a fair spread of reach between these three content types with each showing some of the best and worst reach figures over the time period.

This data is available in Post Exports (in Insights) and is the column called “Lifetime: The number of people who saw your Page post because they’ve liked your Page (Unique Users)”

The Page now has 375,649 fans but the rate of growth has stalled and a look through the data would suggest this is simply because the huge viral awareness the Page enjoyed in previous months has all but disappeared.

Alexandre is still posting multiple times a day (at least 7 times per day) but average reach has dropped like a stone. The most recent data is:

Wow! What a difference.

It’s no surprise that Alexandre said to me:

“This is not fair, we put so much love and work in our baby and now Facebook is destroying us.”

What should the Page do?

This is such a tricky question to answer.

This is not the only Page that had previously enjoyed great reach effectively by exploiting loopholes in the News Feed algorithm and getting creative with reciprocal post sharing to be suffering. And I guess is one of the Pages that Facebook had in its sights to clamp down on. It’s therefore highly unlikely that the Page will ever again see those dizzying heights of reach that it enjoyed even a few months ago.

To be fair, other ‘ordinary’ Facebook Pages will probably see this as levelling the playing field. “Welcome to our world” I hear you say!

For a commercial brand wanting big reach, the only way to achieve that nowadays is through genuinely viral content. And boy is that hard to create. Or to throw a lot of ad budget at Facebook.

Ad budget isn’t an option for Alexandre. I Love Pot is a hobby Page and unconnected with any commercial enterprise.

My recommendations for her seem somewhat lame in the light of what she has achieved before:

I’m sure other people will have ideas. Please share them in the comments.

I Love Pot is an example of a Page that has totally bucked the trend in the last few years (until now of course) with reach and growth results unheard of for typical Pages.

It is so easy to become disheartened when our own Page growth, reach and engagements seem low and we read that Facebook may be limiting organic reach even further.

I always go to Locowise for the most robust and recent studies in reach and engagement. Their most recent study showed that the average number of new followers per day for a Page of 10,000 fans is just 3 new fans per day. The last year has seen a general decline in the rate of page growth and Locowise reckon that paid activity is the key to growth in 2018. Paid is also key for reach with paid reach now accounting for 40% of total reach.

So if your average reach is above 7% you are actually doing pretty well! Add a few dollars of boost budget to your most important posts (but do target them well) and you should start to see some results.

Marie Page is one of the UK’s leading Facebook marketing experts. She is a founding partner of digital marketing consultancy The Digiterati and the Digiterati Academy e-learning portal for marketers and entrepreneurs. Her award-winning Master's Dissertation was the culmination of three years' academic research into Facebook that resulted in a book (and companion online course) 'Winning at Facebook Marketing with Zero Budget' that became an Amazon bestseller. Marie's work on the Facebook News Feed algorithm was featured in The Huffington Post. A recognised thought leader on social media, Marie is often approached by journalists for comment in articles such as this Telegraph article. She was also interviewed for ITV's Tonight show on Facebook privacy issues in relation to advertising. Marie is a regular guest on digital marketing blogs and podcasts including Social Media Examiner and Smart Insights. In 2018 she is speaking at Brighton SEO, Europe's biggest search and marketing conference. Marie is also author of two Smart Insights books: 'Smarter Guide to Facebook Marketing', now in its fourth edition, and 'Facebook Ads Guide', both edited by Dr Dave Chaffey.
40
shares
ShareTweetLinkedIn
PrintEmailBufferPinterestStumbleupon