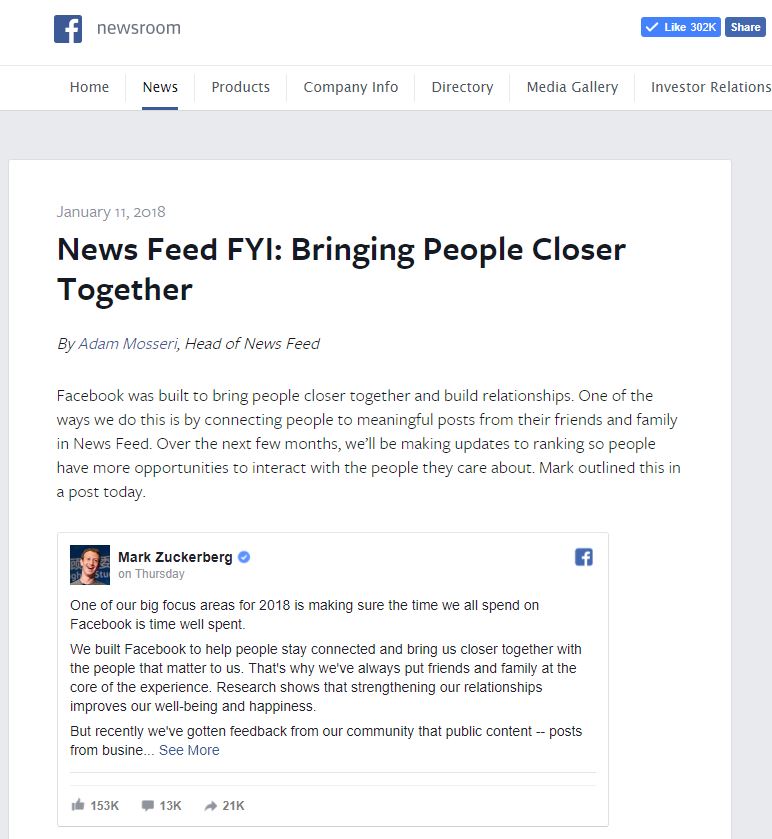 I woke up this morning to a news feed full of Facebook doom for Pages.
The usual suspects have jumped onto a late Facebook/Zuckerberg announcement overnight, all determined to get their slice of the PR fallout.

Back in June 2017 Facebook announced a new mission statement:

“Bring the world closer together”

This announcement is part of that drive which is all about community and helping people stay connected to the *people* that matter to them. Note the use of the word “people” in Zuckerberg’s statement. No reference at all to organisations and brands.

In many ways I think this is simply part of the trajectory Facebook has been on for some time. They know their users prefer to hear from friends and family rather than seeing loads of ads. And that News Feed is a busy place with so much more potential content vying for your attention.

But Page Admins must take note. If you carry on posting with the same lame techniques you’ve been using for years you will be punished.

Here is my summary of the key changes and what you should do about them:

What are the key changes Pages will face?

Facebook is going to “show less public content, including videos and other posts from publishers or businesses”. So even the much favoured video will be reduced in reach effectiveness for Pages. The statement references that video, live video in particular, is still highly engaging (so continue to prioritise this), particularly as it tends to lead to discussion. And make sure your video is configured for engagement. Actively encourage comments and sharing verbally on the video and in your written intro to it. Video that simply results in a passive experience will not do so well.

The Explore feed is now available to everyone – showing content from Pages that you aren’t currently following. Look for the little Rocket icon at the top of News Feed: 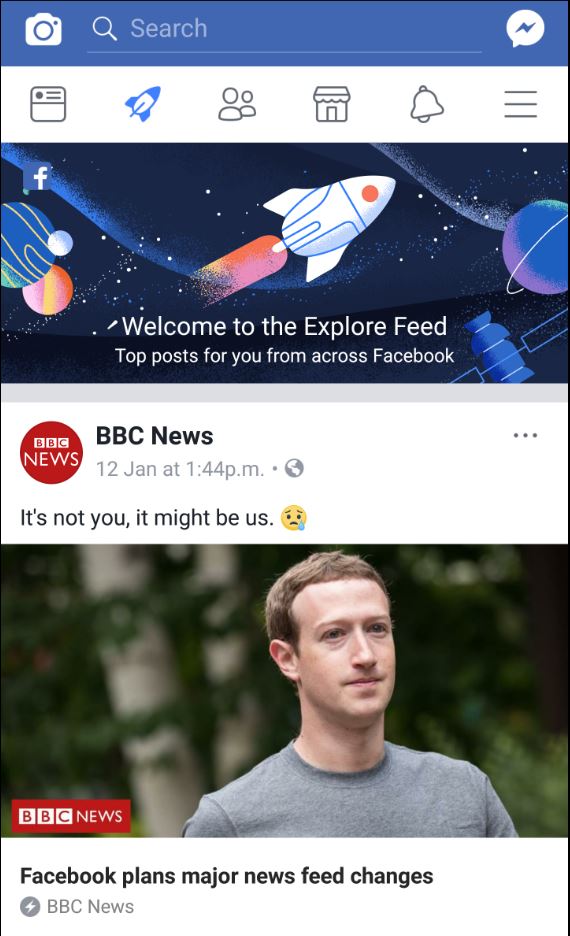 I reckon that the Explore Feed will increasingly be the place to see public content from businesses rather than your standard News Feed which with this announcement seems to be about to embrace a shift to more friends and family (cue annoying photos of breakfast and #soblessed #makingmemories photos) and of course a dose of ads and other sponsored content (those shareholders have families to feed). But the Explore Feed shows me loads I am not remotely interested in. Why, when we like a Page can we not have options on “See everything”, “See most popular” etc. I don’t want to set up notifications for most Pages because they are intrusive (they ping my smartwatch, they interrupt my train of thought by popping up randomly when I’m working at my desk).

For me personally, I like to see business content on Facebook. I can’t remember the last time I used an RSS feed. I use Facebook to keep up with the organisations I am interested in. And as a user this update bugs me. Am I really so unusual in wanting a Feed that is a mix of friends, family and business? According to Facebook’s research I am. But I do also wonder how much of that research is skewed by a perception that the News Feed is full of ads. My friends, when they moan about FB are normally referring to irrelevant ads from companies they are not fans of. That’s generally down to poor ad targeting. And Facebook needs to take it’s share of the blame as the interest targeting such brands use is a terribly blunt tool. Newbie and novice advertisers use interest targeting as if it is some golden ticket when they should be focusing on website custom audiences, re-targeting, lookalikes and perhaps the sharper instrument that is detailed targeting (combining interests).

Which Pages should be most concerned?

Pages that have tumbleweed content are warned that they will see the biggest decreases in distribution. The message here is that poorly performing posts will be hugely detrimental overall Page performance. So stop with the poor quality content now.

This is an announcement about changes that are currently underway and still being rolled out. You have time to get your house in order. Reduce the number of posts you make and focus on quality, and content that drives engagement. If your content is promotional, create it as an ad and allocate budget to it.

What if fans *really* want to hear from you?

You will still be able to opt to “See First” in your News Feed Preferences for Pages you are very keen to hear from. But frankly, how many fans will really do that? You’ll need some very well-trained fans to do that, and really up the ante on your posts as engagement-bait will continue to be demoted. So stop using obvious ways of driving engagement.

Highlights of the big Facebook Zero announcements for the TL;DR brigade.

The video explanation from Facebook’s Head of News Feed

Is there any good news?

The aspect I think many commentators have missed is the opportunity here for Groups. As I’ve said before, Groups create community and sit well within Facebook’s new mission statement. My prediction is that Groups will be the thing to rise well above this update and you’d be wise to be investing in building them around your brand and brand community now. We’ve a very recent course on Facebook Groups if you need to get rapidly geared up for them.

We’re seeing average reach of 50% (yes, that’s FIFTY per cent of our audience) with the Groups we run. We reveal all about Group reach here.

Is this really any different to what we’ve seen before?

Honestly, at the moment we don’t know. The statements are pretty ambiguous  and open to very wide interpretation. The fact that this has been such a major announcement (which is rare – generally the News Feed algorithm is tweaked regularly and we don’t hear about it – plus this time big news and media organisations were privately briefed beforehand) is indicative of major change.

But none of this changes what I will recommend when I’m training people on Facebook marketing. I’ve always said to focus on quality over quantity, to cut the tumbleweed posts because the damage the brand, to steer clear of promotional content outside of ads.

Reach has been shockingly low for years. Locowise’s most recent study puts it at 8.2% of total Page audience with 15% of all Pages using advertising to pay for 39% of reach.

Facebook is Pay to Play. It has been for a very long time but Facebook Zero appears to have woken up a few more people to that news.

[I had to share this. Carlton wrote his response in our Team Digiterati Facebook Group and it’s too good not to make more widely available]

Frankly this is long overdue.

People engage with people, not brands. People are on Facebook primarily (<—and that’s the important word) to connect and stay in touch with friends and family*, not see the latest witty update from a business you ‘Like’.

Sure, we do enjoy seeing stuff from brands, especially stuff that perhaps changes our perspective or makes us feel warm and fuzzy towards them. Plus FB has given us – the people – a voice to interact with brands (at scale) that we didn’t have previously, but that’s not the reason we’re there or even the reason FB exists.

FB has become abused by brands, but it’s a problem that was created and fuelled by FB. Brands are only guilty of exploiting it, which is what we do over and over again. Remember, marketers ruin everything; when something is found to work everyone jumps on the bandwagon until it doesn’t. That’s where we are now.

But 2 billion Monthly Active Users (MAUs) is still 2 billion MAUs. And most of them mobile. It’s a really big place where everyone hangs out for long periods of time. So here are a few of my random observations on this news:

The statement says brands, publishers and media will take a hit. So maybe, just maybe this update will be kinder to local businesses, you know, the ones in your community that you feel a genuine connection with and loyalty towards. Let’s see. I hope so. Those are the businesses Facebook should be helping to support in order to fulfil their self-declared obligation of fostering genuine community. It’s what happens offline that’s as important (more important) than online.

With that in mind, maybe now is the time to review your Page’s category. In the past ‘Media and News’ got a nice algorithmic bump, but that will end now. It already did to be fair.

As others have said, live video that generates discussion will be one of the few useful post types for businesses on FB. Expect a flurry of activity. I’ve personally grown tired of the live videos but others presumably have not.

FB Groups have really taken off recently. Zuckerberg stated Groups are key to the future of FB last summer. The FB mission statement now focuses on community. So any business worth its salt is actively considering how a Group could be useful to them and their customers. But not every business will be able to find an appropriate angle. It’s NOT worth starting a Group for the sake of it, just as it’s not worth starting a Page for the sake of it. If *people* have something to say about your product, service or organisation a Group could work well. But if you simply use it to promote non-stop it’ll be dead in the water, just like your Page.

Facebook continues to develop services that are VERY useful to brands (and people) in the form of customer service tools. Look at the recent emphasis on Messenger. Look at the integration of PayPal payments in the US. Look at Zuckerberg’s recent mention of cryptocurrency, which reading between the lines could facilitate micro payments. Over time I would expect and hope to see Facebook becoming much more like China’s WeChat (the ‘plumbing’ enabling commerce within a single app) than simply a promotional/advertising platform.

All this begs one question though: will brands that have already invested hugely in Facebook trust them any longer? First they paid to get fans, they paid people to create engaging content, then they paid to boost that content. Typically Facebook says “jump” and brands say “how high?”. Can this and will this continue or will some brave board execs simply declare time on Facebook. When is enough enough?

Marie Page is one of the UK’s leading Facebook marketing experts. She is a founding partner of digital marketing consultancy The Digiterati and the Digiterati Academy e-learning portal for marketers and entrepreneurs. Her award-winning Master's Dissertation was the culmination of three years' academic research into Facebook that resulted in a book (and companion online course) 'Winning at Facebook Marketing with Zero Budget' that became an Amazon bestseller. Marie's work on the Facebook News Feed algorithm was featured in The Huffington Post. A recognised thought leader on social media, Marie is often approached by journalists for comment in articles such as this Telegraph article. She was also interviewed for ITV's Tonight show on Facebook privacy issues in relation to advertising. Marie is a regular guest on digital marketing blogs and podcasts including Social Media Examiner and Smart Insights. In 2018 she is speaking at Brighton SEO, Europe's biggest search and marketing conference. Marie is also author of two Smart Insights books: 'Smarter Guide to Facebook Marketing', now in its fourth edition, and 'Facebook Ads Guide', both edited by Dr Dave Chaffey.
111
shares
ShareTweetLinkedIn
PrintEmailBufferPinterestStumbleupon