Here are the key points from the keynote speech. 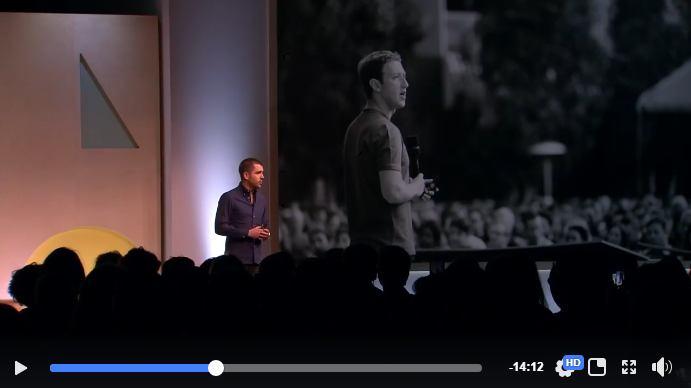 Chief Product Officer Chris Cox flew into Europe to make some big announcements in relation to the new Facebook mission of building communities. In attendance at the two-day event were some of Europe’s top Facebook community builders: group admins, event creators, and page admins.

You can watch the video here but I’ve summarised the key points below:

This was the big announcement. And they sound great!

“2017 was a really tough year for Facebook, for social media and for the internet. We faced tough questions about our role in democracy, our role in public discourse, our role in journalism and our role in well-being.”

“And we take these questions incredibly seriously. We’re coming this year to do two things. The first is to remove bad content from our platform. To do that we have our best teams internally, partnered with world experts externally, working through each of the categories and issues, to make sure we can ensure that Facebook is a safe place for everyone.”

“And the second thing we’re doing is to accentuate all the good things that are happening.”

Chris Cox confirmed three areas Facebook is working on improvements to in relation to that tough year of 2017:

In his speech, Cox went back to the beginnings of Facebook and suggested that its roots were as community software. Hilariously the first 1M member Group (when total FB membership was just 10M) was a Group called Students Against News Feed. He defined community as:

A collection of people who give trust and investment over time, feel a sense of belonging, connection and a feeling of safety.

That pretty much sums up my experience of good Facebook Groups.

And whilst I’ve reported these keynotes in reverse order (I gave you the big announcements first, whereas in real life they set the scene and make everyone feel nice and cosy about communities), Nicola Mendelsohn, VP EMEA, gave a moving and personal account of the Group she discovered (and now co-admins) that supports people with follicular lymphoma.

Mendelsohn used the other current Facebook buzzword “meaningful” when describing effective Groups and said that these online communities where people share common ground have become a vital part of people’s daily lives providing a support system that helps them cope with life on and offline.

Personally I’m pleased to see them, especially so soon after Facebook Zero or “The Change” as one of our own Facebook Group members put it!

And I’m delighted at the emphasis on Groups over Pages. Most commercial organisations and brands just don’t “get” Groups. They struggle to justify the investment, due in part to the challenges of measuring ROI so are sticking with Pages and ads. And to my mind missing a huge opportunity. But hey, I’m happy to see Groups stay community-focussed. Once the big brands move in en masse they will spoil it for everyone. So let’s just keep them our little secret huh?

Marie Page is one of the UK’s leading Facebook marketing experts. She is a founding partner of digital marketing consultancy The Digiterati and the Digiterati Academy e-learning portal for marketers and entrepreneurs. Her award-winning Master's Dissertation was the culmination of three years' academic research into Facebook that resulted in a book (and companion online course) 'Winning at Facebook Marketing with Zero Budget' that became an Amazon bestseller. Marie's work on the Facebook News Feed algorithm was featured in The Huffington Post. A recognised thought leader on social media, Marie is often approached by journalists for comment in articles such as this Telegraph article. She was also interviewed for ITV's Tonight show on Facebook privacy issues in relation to advertising. Marie is a regular guest on digital marketing blogs and podcasts including Social Media Examiner and Smart Insights. In 2018 she is speaking at Brighton SEO, Europe's biggest search and marketing conference. Marie is also author of two Smart Insights books: 'Smarter Guide to Facebook Marketing', now in its fourth edition, and 'Facebook Ads Guide', both edited by Dr Dave Chaffey.
35
shares
ShareTweetLinkedIn
PrintEmailBufferPinterestStumbleupon