I love these crowd sourced articles (great for traffic generation in their own right of course) and am always happy to contribute but inevitably how ever much each contributor prepares it gets edited down to a soundbite or two so I thought I’d write up a full extended version of my replies with case study examples from The Digiterati. I’ve kept to organic methods rather than delving into the world of Facebook ads.

Inbound marketing is important to us. And in a field as competitive as digital marketing the early bird catches the worm in terms of indexing. Early birds often also catch the eye of other industry gurus and journalists.
We prioritise creating content on topical issues as early in the game as possible and work on subjects where we have expertise of our own, and ideally a relevant course in our Digiterati Academy that we can promote on the back of the content.

It goes without saying that the url of any blog post, the H1, H2, any Alt text etc etc is SEO’d up for the relevant search terms.

We try to create original graphics that would satisfy a popular search term, particularly if it is early in the game. So when Instagram recently revealed details of its algorithm we wrote an informative blog post on the Instagram Algorithm and commissioned an accompanying graphic.

The graphic was important because none of the articles I had come across on the algorithm had anything remotely decent to accompany them graphically. Everyone was using dodgy screen shots that Instagram themselves had revealed in a presentation. We wanted to do something professional that looked like we were an authority on the topic, was branded with our details and would index well for image search.

Keeping with the algorithm theme I had spent many years keeping on top of and demystifying the Facebook News Feed algorithm. When this was updated we decided to create a new concept along the lines of Search Engine Optimisation (SEO) and came up with News Feed Optimisation (NFO) .

And of course there was an algorithm graphic to accompany the content. We’ve given our algo graphics similar styling and will continue with this Digiterati approach to presenting ourselves as algorithm authorities.

Infographics are super sticky and get shared virally. So our work on NFO inevitably got made into an infographic-style piece. We realised that while Periodic Tables existed of virtually every other digital marketing concept we came across, there wasn’t one for the Facebook algorithm, so we made one. 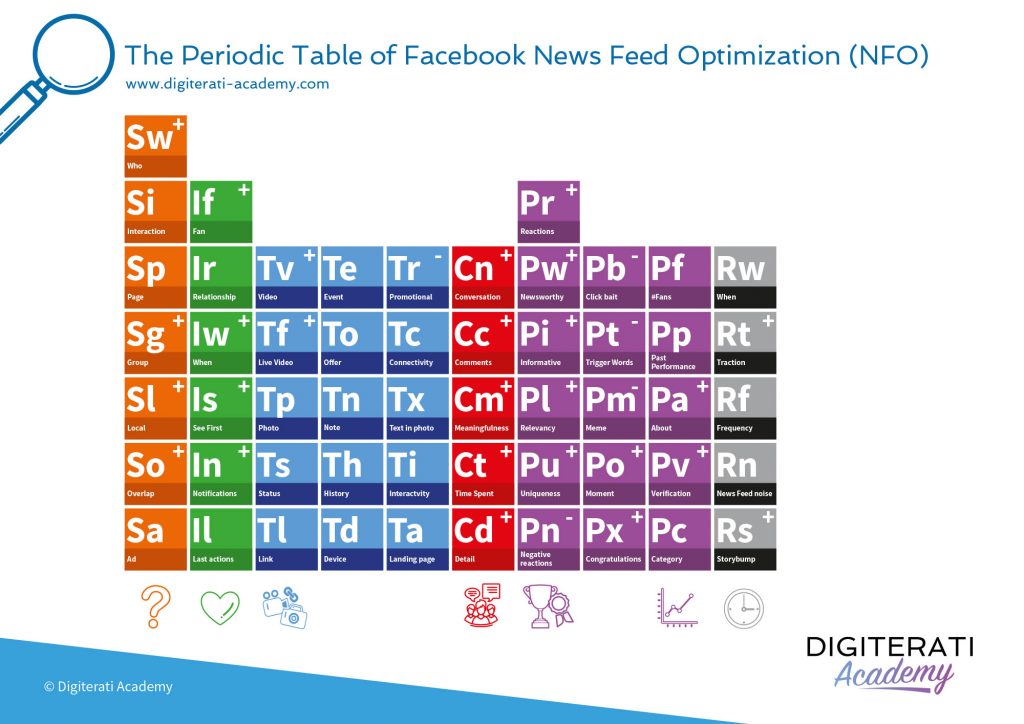 As someone with a Masters in Digital Marketing, carrying out original academic research is an itch I like to scratch pretty regularly.

It makes sense for us to carry out research that is unique, of interest to our audience, that will drive traffic and also contribute to our own consultancy and training.

Our most recent piece of research was on the topic of whether it is best to boost a Facebook post, create an ad or promote a post.

All these pieces will additionally drive traffic via our efforts to socialise it (I’m not sure if that’s actually a recognised industry term but it’s what I call the process of propagating the content on Facebook, Twitter and LinkedIn). We’ll also feature it in emails to our mailing list.

It will often also get re-purposed into online Masterclasses in our Digiterati Academy and, if I’ve got my PR hat on properly may well also earn it’s keep in third party media.

We love to court controversy where we feel strongly about it and my colleague Carlton ‘Ranty Man’ Jefferis can usually be relied upon for a controversial opinion.

He was responsible for the below graphic: 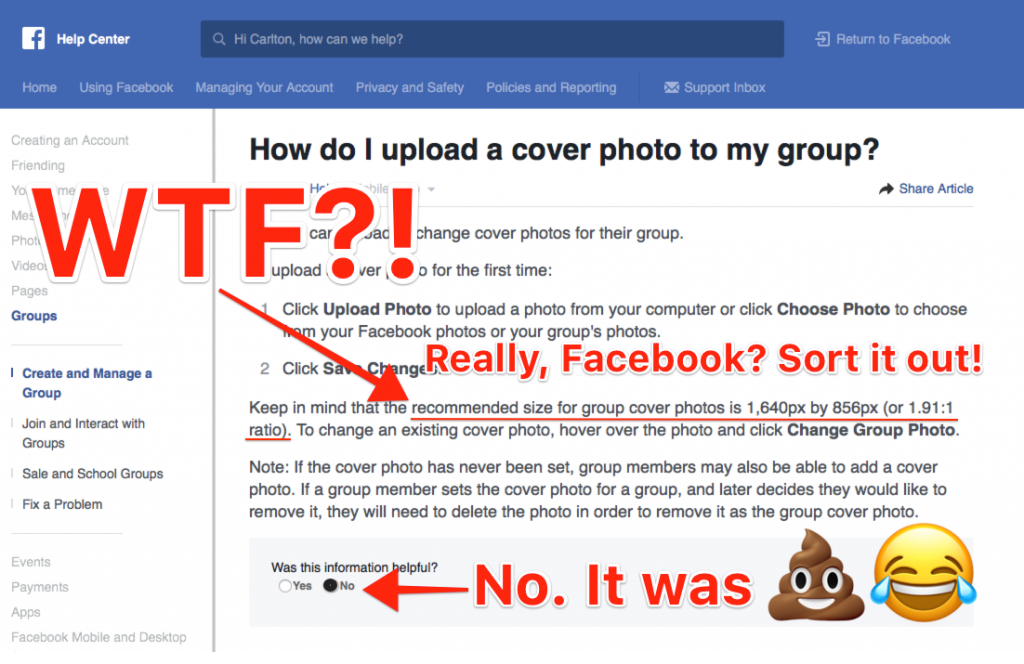 When Facebook changed its recommendations on Group cover photo size we argued for a different approach to the one Facebook was recommending. Our blog post and resultant downloadable template was picked up by the legend that is Mari Smith and Facebook’s own staff even started recommending it.

7. Look for what’s working in the long tail

Google Analytics is a brilliant source of ideas for inbound content. We keep an eye on which pages on our website are being visited most frequently and are often surprised by the secrets revealed by the data.

Our article reporting that videos on Facebook would start to loop continuously is the fifth most trafficked page on our website. It’s a nice example of long tailed search and we capitalise on that traffic with a pop-up (don’t groan – they convert for us!) that’s relevant to the subject offering a free Ultimate Guide to Facebook Marketing. This of course gets users into a sales funnel for our Digiterati Academy offers.

I guess idea number 8 would probably be to create a listicle but I’ll take that as read!

What’s next after traffic?

Getting traffic to your site is only the first step. You then need a sales funnel that results in some bottom line action. So data capture devices (you’ll see one at the top of this article) that provide further value and ultimately a great offer are essential. Here’s an article on funnel marketing approaches if that’s new to you.

Let me know in the comments what traffic generation approaches have worked for you.

Marie Page is one of the UK’s leading Facebook marketing experts. She is a founding partner of digital marketing consultancy The Digiterati and the Digiterati Academy e-learning portal for marketers and entrepreneurs. Her award-winning Master's Dissertation was the culmination of three years' academic research into Facebook that resulted in a book (and companion online course) 'Winning at Facebook Marketing with Zero Budget' that became an Amazon bestseller. Marie's work on the Facebook News Feed algorithm was featured in The Huffington Post. A recognised thought leader on social media, Marie is often approached by journalists for comment in articles such as this Telegraph article. She was also interviewed for ITV's Tonight show on Facebook privacy issues in relation to advertising. Marie is a regular guest on digital marketing blogs and podcasts including Social Media Examiner and Smart Insights. In 2018 she is speaking at Brighton SEO, Europe's biggest search and marketing conference. Marie is also author of two Smart Insights books: 'Smarter Guide to Facebook Marketing', now in its fourth edition, and 'Facebook Ads Guide', both edited by Dr Dave Chaffey.
20
shares
ShareTweetLinkedIn
PrintEmailBufferPinterestStumbleupon